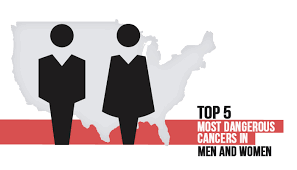 Medical science has advanced exceptionally well in the past years. The scientists have tried to cure almost every type of cancer, but few still have a very high death rate. There is no doubt surviving cancer greatly depends on the stage, diagnosis time, and what kind of treatment is received by the patient. However, you will have many cancers that offer a very low chance of survival to the patients.

The fear that arrives with cancer can affect anyone mentally and physically. You will be surprised to know more than 600,000 died only in the United States due to cancer. We have dedicated this list article to creating a list of the top 5 deadliest cancers in men and women. Let’s go through the article carefully and increase your knowledge.

Colorectal cancer is one of the most dangerous cancers that normally affect mature aged people. It normally has a five-year survival rate if cancer reaches an advanced rate. However, the chances of survival are only 90% even after the early-stage diagnosis. The biggest problem with this disease is they cause almost no to fewer symptoms in the body.

The most popular method for detecting and treating this cancer is colonoscopy, where a tiny camera is used. It starts in the large intestine, which is considered the final portion of the digestive system. There are a plethora of treatments available to treat this cancer type, ranging from targeted therapy to chemotherapy and even immunotherapy. It is also known with the name of colon therapy in the medical world.

It needs to be understood that colon cancer often doesn’t causes much symptoms in the early stages. They likely show up in the later stage of this disease. If anyone feels even a single symptom out of all these, it is strongly recommended to visit a doctor immediately.

The next cancer we want to recommend is bronchogenic carcinoma which accommodated more than 10% of total cases in most countries. Although this cancer can affect anybody, smoking is considered the major cause in most cases. People who smoke for over ten years put themselves at greater risk for this cancer.

According to medical experts, quitting smoking can minimise the risks to a greater level. However, there are many cases where second-hand smoke turns out to be the reason for bronchogenic carcinoma cancer. Another reason for this kind of cancer is exposure to radioactive gas, named radon that usually comes with soil.

There is a number of treatments available for this cancer type. However, the exact effect depends on how an individual’s body responds to them.

Breast cancer has become one of the deadliest cancers, especially among women. A rough estimate proves there are over 700,000 women who lose their lives every year due to this disease. It mainly occurs in middle and older age, but there are lots of cases where young women get this cancer. In the past few years, breast cancer cases have increased by 0.5% every year, which is a cause of concern for sure.

Besides being a very common cancer, it has slowly become one of the major causes of death globally. The main cause of this disease is the growth of breast cells at an abnormal rate. The continuous accumulation of these cells creates a lump that causes cancer in the breasts. Other factors that can cause breast cancer are environmental, hormonal, and lifestyle issues.

There are plenty of reasons that can cause breast cancer. It is strongly recommended to never avoid any kind of lump or mass accumulation, especially in the breast area. You should immediately connect with a doctor once any of these symptoms occur.

Leukemia is one of the deadliest cancers that make it difficult for the body to fight even minor infections. The body’s immune system gets weakened after this disease over a certain time. There are many different forms of leukemia that negatively affect the functioning of the body.

Additionally, it is considered one of the most complex cancer to treat, considering its nature. The major causes of this cancer vary from genetic problems to environmental factors that cause mutations in the body cells. It is also known as the leukemic changes, due to which cells divide at a faster rate. Few main forms of leukemia are acute lymphocytic, acute myelogenous, chronic myelogenous, and chronic lymphocytic.

Although there is no proper treatment for leukemia presently, processes are using which patients can reach a state of remission. It can be done using many treatments, like monoclonal antibody therapy, radiation therapy, chemotherapy, and bone marrow transplants.

Pancreatic cancer is hard to detect disease whose symptoms don’t show up until the advanced stage. It can be commonly found in individuals with diabetes or ones who often get exposed to particular chemicals. The treatment for this cancer depends on where the tumor is located and its size. It usually occurs due to mutations in the pancreas cells that can make their numbers out of control.

Out of all cancer deaths, nearly 7% are caused by pancreatic cancer globally. The death rate is a little bit more among males when compared with females. The major risk factors of pancreatic cancer are diabetes, obesity, smoking, and chronic pancreatitis. Additionally, people older than 45 years and ones having hereditary syndromes also have a greater risk of this cancer.

If you have even one or two from the list mentioned above of symptoms, it is strongly suggested to contact your healthcare provider. It is a painful disease that needs to be taken very seriously, and that’s why not even a single sign should be missed.

These are the deadliest cancers in men and women needing early diagnosis. We understand it is difficult to control the risk factors, like genetics and family history. However, patients can control things like smoking or limiting alcohol. Therefore, it is important to perform regular screening for early diagnosis. However, tons of other cancers cause death in top countries, like the United States, India, United Kingdom, etc.

Do you have any queries regarding these deadliest cancers mentioned in the post? We will be happy to know about it in the comment section!