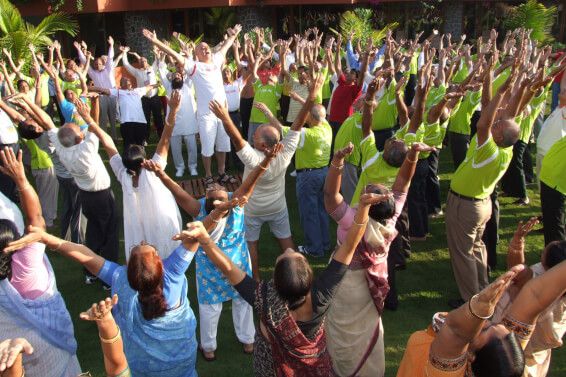 We all have to fight certain diseases throughout our lives. However, cancer is considered the most difficult one to deal due to obvious reasons. It not only affects the physical well-being of a patient but also breaks them mentally with stress and anxiety. In that case, laughter yoga can be a real blessing for making physiological and biomedical changes to feel joy and happiness. It is considered a unique approach where the individual finds happiness internally without the other’s presence. Stress and fear can be easily countered using this technique. According to many top studies, only 10 minutes of laughter daily is enough for reducing the stress level by 70%.

Laughter is a pretty terrific method for dealing with heart disease, diabetes, and blood pressure. Although stress is a normal issue that most people deal with these days, it can greatly impact the emotional & physical health of cancer patients. This post will explain laughter yoga and how it can be useful for cancer patients. Please go through the entire article and understand its impact adequately!

What is Laughter Yoga?

Most people think laughter yoga is a comedy act performed in the parks, but it is an exercise to make your health better. It is a perfect mixture of laughter with breathing techniques that improve the health of cancer patients to a different level. The number of laughter clubs who have started using this technique is on the rise in various countries. It was originated in 1995 and has reached more than 100 nations across the globe. There are numerous studies that have proved its effectiveness for improving the overall health of the body.

It can perfectly work as a medicine for dealing with anxiety that a patient feels after knowing about cancer. This technique is also very useful for tackling worries even after getting the required treatment. It works by lifting the mood and boosting the body's immune system. All these things together let the body feel in a much better state.

How should laughter yoga be performed for cancer patients?

A simple act of laughter can be a great remedy for tackling mental stress during cancer treatment. Even the top experts believe that there is no alternative for this remedy. Let’s understand how patients dealing with cancer can perform laughter yoga.

The first thing to do is clap your hands for having a complete palm to palm and finger to finger connection. It won’t only increase the energy levels but also stimulate the major acupressure points. You can think about adding dance movements and chanting to build energy in your body.

Once positive energy is established in the body, it’s time to have gibberish talks to reduce inhibitions and feel laughter in the body. In fact, it will help express a variety of emotions like sadness, anger, and happiness in a person having stressful days. It is just a beginning that needs to be followed by a few laughter exercises we have mentioned in detail below:

It is an essential exercise that can be performed with a partner or group of people. Here, they have to hold hands and laugh together or even hug if it makes them comfortable.

Individuals have to fake a smile and giggle followed by starting enjoying laughing slowly. It can be increased gradually in terms of volume with each passing minute.

We believe it is one of the most effective laughter yoga for cancer patients, where the individuals have to voice their discontent in a comedy manner. It is up to them what kind of passion they want to show during this laughter exercise.

The chances of cancer exceed when someone becomes older, and adding conductor laughter in such cases adequately makes sense. Here, the patient needs to feel like a bus conductor and move an imaginary orchestra using arm movements while singing their favorite song with laughter sounds.

This one is another terrific laughter yoga exercise that senior cancer patients can use to tackle their stress amazingly. Here, they have to laugh at sounds like Eee Eee, Aye Aye, Ah Ah, Ho Ho, etc. used during bowel movements.

The next option we recommend is the silent laughter exercise, where the mouth needs to stay wide open with full laughter. It can also be done using funny gestures if performed in the company of a few people.

Cancer patients have to go through a tremendous set of trauma both emotionally and physically. Tons of researchers show laughter is a natural gift having the ability to minimize stress in cancer patients. Performing laughter yoga regularly can offer a great sort of benefits in the following manners:

Q. Does laughter yoga do anything for cancer patients?

Yes, it is very beneficial in calming the mind as cancer patients often develop fears regarding the treatment. Additionally, it is instrumental in easing symptoms and side effects like sleep issues, tiredness, pain, and depression.

Although there is no straightforward evidence that it can cure or prevent cancer, laughter yoga is great for developing physical and mental stamina. We can say it can work as a long remedy for maintaining good health to keep cancer away.

There are lots of side effects in patients who go through chemotherapy treatment. Performing laughter yoga can help in easing off those effects to a greater level.

Q. What happens during laughter yoga?

It is basically a therapy where humor is used for eliminating stress and pain from the patient’s body. Laughter yoga mainly works on boosting the mental well-being of a person.

There is nothing mentioned anywhere that laughter yoga can cure any sort of cancer in any manner. It provides strength to deal with side effects and stress that these patients have to commonly deal with.

Laughter yoga can bring tons of psychological and mental benefits to everyone, but it can do wonders for those who are dealing with cancer. It is capable of boosting the net oxygen supply to the body which turns out to be very beneficial in improving health. It effectively reduces the stress-making hormones by changing the mood. If you have any queries about laughter yoga, feel free to write about it in the comment section.